I often expand my Goodreads/Amazon reviews for the blog, so this includes parts of my posted reviews and adds a little bit. Based on the Amazon/Goodreads rating system, this was easily another 5-star from Brenda. Why 9.5 instead of 10 for the blog rating? I guess it's because I wasn't sure about this story when I got started. The blurb didn't persuade me instantly to read it, but since I've loved all of Brenda's books, I had faith that she'd turn me around. She did that and then some!

I say this time and again - I love a story with characters who make me feel. I don't need to like them every second, but they need to make me react emotionally. I like it even better when they elicit a variety of emotions. I laughed (Troy in the trailer, anyone?), I cried numerous times, right up to the end. I wanted to smack Brady and Palmer both at certain points (Brady in particular, silly alpha male!) I love great characters who grow, realistic narratives and emotional reads, and while I'm still not convinced that the synopsis tells me I'll get them in this story, I did.

If you're on the fence about this book, don't be. Brenda has hit it out of the park again. There are so many emotional events in this book that you won't even realize you've flown through it until you're at the end.

If you love hot, sexy reads that truly engage the reader in the lives of the characters, pick up this story. You won't regret it.

Now, Brenda, when are we getting stories for Troy and Amanda - together, maybe?

Palmer Sinclair was on the edge of happily ever after when she broke off her engagement to Brady Grant. The end of their relationship marked the beginning of a painful solitary journey for her. Though she makes places beautiful with her work as an interior designer, the rest of her life is anything but beautiful – it’s slowly pulling her under.

Brady, a contractor, is swiftly building his business into an empire. Work is a faithful companion that never lets him down like Palmer did. When he sees women now, it’s on his terms. And his terms are simple: just sex. He won’t let a woman break him again.

Palmer is barely holding it together when she and Brady are unexpectedly paired on a project after a year apart. The pull between them is stronger than ever, but the fallout from their reconnection leaves them both wondering if maybe some things are better left unsaid. 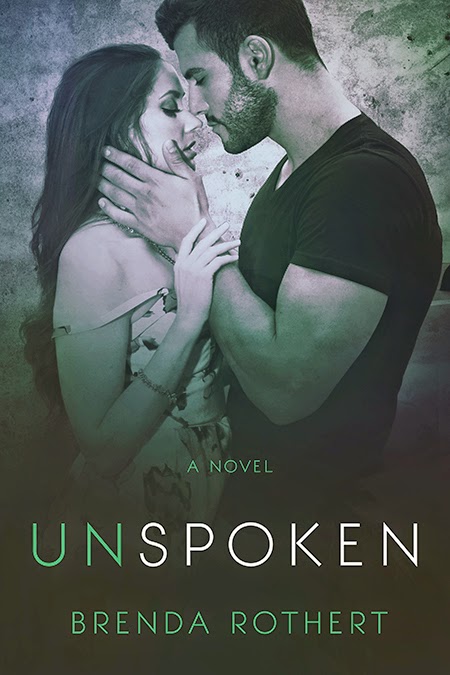 **Part of the Proceeds of the Sale of Unpsoken will go toward The Keith Milano Memorial Fund at AFSP for the rest of the month of October.**

I grinned at the image of the bride in the magazine I held, picturing her classic, beaded veil and big cascading curls on myself.

“You like?” I asked, turning the magazine around for my design partner Georges to see.

“Eh,” he said, frowning. “Maybe if you were going to prom in 1985. Add some pink frosted lipstick and dark blue eye shadow.”

I narrowed my eyes at him. “I don’t want my hair pulled back tight the way you like. Brady wouldn’t like it, either. He likes to touch my hair. You know, run his hands through it.”

Georges gave me a horrified stare. “Not on your wedding day, Palmer! What about the photos? Tell him to keep his caveman hands to himself until the wedding night.”

Just the words wedding night brought on a tingle of excitement. Not that Brady didn’t bring it every time we had sex, but the idea of wedding night sex was especially hot. He’d told me about a fantasy involving his face between my thighs while I still had the dress on, and I couldn’t deny that I was now fantasizing about it, too.

“We still have quite a few details to work out,” Georges said, looking up from the bridal magazine he was flipping through to give me a chastising look over the dark rims of his glasses.

“I know,” I said, snapping out of my sexy reverie about Brady. “Let me get out my wedding planner.”

“Let’s finish this over sushi,” Georges said. “I skipped lunch and I’m starving.”

I glanced down at my watch and shook my head. “Ugh, it’s after six. I can’t. My mom asked me to stop by her house on my way home and I told her I’d be there around six.”

“Damn you. Now I have to get carryout.” Georges rolled his eyes dramatically.

“I’ll buy lunch tomorrow,” I said. “Don’t forget that we’re going to the florist’s shop for a dry run of the centerpieces.”

“Maybe,” I said, smiling at him. “It has been a full week since we last saw it. I’ll see you in the morning, okay?”

He nodded and turned back to the magazine. I checked my phone on the way to the parking deck, smiling when I saw a message from Brady.

I wrote back, glancing up occasionally to make sure I didn’t crash into anyone.

Me: Lunch with G tomorrow. I’ll cook dinner tomorrow night at my place. Love you too.

We still called it my place even though he’d practically moved in. One married, we planned to live in my tiny bungalow after instead of his tiny apartment. Between Brady’s building skills and my design ones, we’d made my place into a cozy love nest.

On the drive to Mom’s, I let my mind wander to the job I’d just been hired for. I was designing a nursery for twins – a boy and a girl. My client loved a traditional look, so I was using gingham, soft yellows and greens and gorgeous white painted furniture.

This job was creating unexpectedly strong maternal pangs. Brady and I both wanted kids, but we wanted to wait a couple years. He was paying a price for his father’s lousy decisions, and we both had to focus on our careers for a while.

Still, I let myself dream about the day we’d have a baby. Hopefully one with his dark hair and bright green eyes.

I parked in front of Mom’s house, noticing the faded maroon shutter that had been hanging by one screw had finally fallen off. Brady had offered to paint the dingy brownish exterior when Mom and Danny moved in here last year, but Mom always put him off, saying she knew he was too busy with work.

This place needed a spruce-up, though, even if Brady and I had to show up and just do it. Weeds were beginning to overtake the small flower bed next to the front porch.

When I pulled open the creaky back screen door, Mom glanced up from the kitchen table and stood, meeting me for a hug. She held on longer than usual, and I studied her face when she pulled away.

“Yeah.” She headed for the stove, not meeting my curious gaze. “I made you a plate of dinner. Chicken pot pie.”

I sank into a chair at the table, looking around the kitchen for my younger brother. “Where’s Danny?”

On cue, his wheelchair came rolling into the room.

“Almer!” he cried, reaching out his arms. I grinned and stood, bending down to hug him tight, the way he liked.

As soon as I released him, he turned his chair around, grunting with the effort, and worked his way back out of the room.

“Where are you going?” I called behind him. “I just got here!”

I smiled at his retreating form, realizing I should’ve guessed from his baseball hat and Cubs t-shirt that he was immersed in a game on TV. Though he was 23, Danny’s doctors said he had the mental capacity of a four-year-old. I knew he was smarter than they gave him credit for. But no matter what his mental capacity, he was the brightest ray of sunshine in my life. I’d been in one fist fight in my life – when I was eight and a kid in our neighborhood called my five-year-old brother stupid.

Mom set a plate down in front of me, fussing over grabbing the salt and pepper shakers and a napkin and pouring me a glass of iced tea.

“How are the wedding plans coming?” she asked, her eyes warming with excitement.

“Good. I’m going to make the final decisions on the flowers tomorrow.”

I blew on a steaming forkful of pot pie, studying my mom’s drawn expression. She didn’t bother with fixing her hair or makeup, since she spent her days taking care of Danny. But the lines on her face were more pronounced than usual. Something was off.

“What’s up?” I lowered my fork and set it on the plate. “You look worried.”

She sighed deeply. “It’s probably nothing.”

“I got a call from the hospital today about the pre-op testing for my back surgery.”

“That’s right,” I said, chiding myself for forgetting to call her about it yesterday. “Is there a problem with the surgery?”

Hopefully the doctor hadn’t changed his mind about it helping her or the insurance hadn’t denied coverage. Mom needed this surgery. Years of lifting Danny in and out of his chair had left her back aching every minute of the day, though she rarely complained about it.

“They did an x-ray and it showed a possible mass,” she said, wrapping her arms around herself. “In one of my lungs.”

She sighed again. “It means I have to get a CT scan tomorrow. Aunt Claire came over to be with Danny while I was at the hospital yesterday, and it’s an hour drive for her. I didn’t want to ask her to come back tomorrow. Is there any way you could come over in the morning, around 9:30?”

“Of course.” Emotions swirled inside me. This was so unexpected that I was still trying to wrap my mind around it. “But I want to go with you. I’ll ask Brady to come stay with Danny.”

She shook her head. “I don’t know that they’ll do anything but the scan tomorrow, Palmer. The results may take time. I can handle it on my own. If you’ll be with Danny, that’d be perfect.”

She nodded and attempted a smile. “It’s probably nothing. Just a precaution. They haven’t cancelled my surgery or anything.”

I nodded, too, trying to see that as a positive indication. But the worry that had kicked up my heart rate and drained my appetite in an instant was still there.

Flowers, cake and the perfect wedding hairstyle suddenly felt like ridiculous things to care about. All that mattered right now was my mom being okay. She had to be. 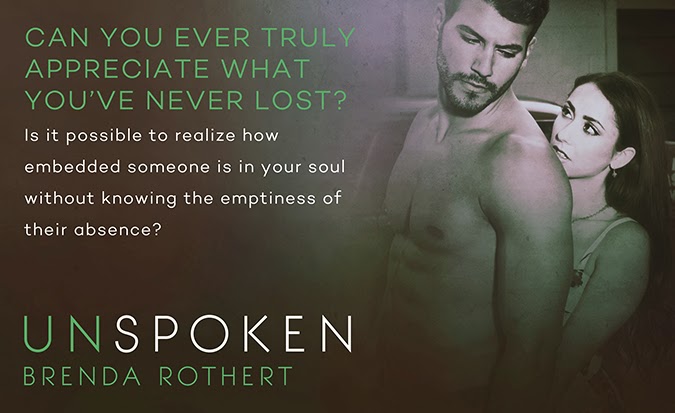 Brenda Rothert is a proud indie author who loves writing stories that make readers laugh, cry and occasionally, yell at their e-readers. Her Contemporary Romances include Unspoken; The Now Series - Now and Then, Now and Again and Now and Forever, and The Fire on Ice Series - Bound, Captive, Edge and Drive. Brenda lives in Central Illinois with her husband and three boys.

Email ThisBlogThis!Share to TwitterShare to FacebookShare to Pinterest
Labels: Blog Tours, Other Authors