Emma, a bookstore owner and writer, meets a wealthy developer named Caleb at a literary event in Orlando. Daringly, she shares with him a reading of her erotica. Soon both of them are feeling the effects ... and Emma’s wondering what kind of lover is underneath Caleb’s expensive suit. Soon the couple are spending every available moment together. Can she trust him with her life as she does with her body? Or will the prickly walls built during her harsh past keep them apart?

FOR FANS OF The Hitched Series by Kendall Ryan and Broken: A Dark Romance by Willow Winters 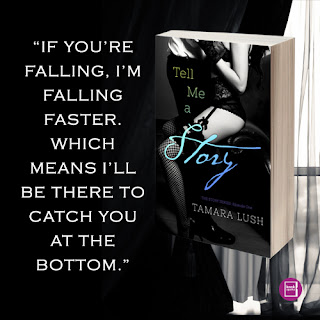 I wanted him the second I looked into his steel-blue eyes.
“How much?” he asked. It was a sexy voice, a deep voice, and I smiled—a smile that alluded to everything but promised nothing, aware of appearing coy and knowing and not-too-eager.
I was in the mood to flirt.
Before I could answer, my friend Sarah broke in. “It’s two dollars a minute. Two dollars, one minute of reading. Half goes to charity, half goes to the writer. But you can negotiate with the writer, if you know what I mean.”
The man smiled and ran a thumb over his full bottom lip as he looked me up and down.
Sarah laughed and wiggled her dark brows. “That’s why I called it Story Brothel. It’s between the reader—” she clapped him on the shoulder “—and the writer. God, I love this. I feel like a madam. Like the Heidi Fleiss of Florida fiction.”
She reached to squeeze my arm, then leaned into me and lowered her voice playfully. “Remember: half for charity. No skimming.”
I rolled my eyes. “Like I’d do that.” Sarah stood on her tiptoes and kissed me on the cheek.
“He looks rich. Maybe he’ll pay you extra so you can save the bookstore,” she whispered.
I scowled, not wanting a reminder of work. This was my rare night out, a time when I wasn’t buried in orders or paperwork or my writing. It was when I transformed myself from serious shop owner into romance writer, like some pulp fiction superheroine. Glasses off; wild, curly hair down; blood-red lipstick staining every napkin and cocktail rim in my path.
And maybe this man’s mouth in a short while. I was long overdue for male attention. At least, that’s what I told myself as I took in his charcoal suit, his crisp white shirt, and the platinum glint of a wristwatch dial. I hadn’t been kissed in a long time—not well, at least. And not by a man this interesting looking.
An unfamiliar song came on, some Arabic-lounge groove with strong, heavy drums. It was how my heart felt against my ribcage. Sarah moved into the crowd. I kept smiling. So did he.
“Story Brothel,” he murmured in a voice so low I could barely hear the words. Because he was tall, he had to tilt his face and his gunmetal-blue eyes downward to look at me.
I shook my head dramatically and clicked my tongue against the roof of my mouth. “You don’t seem like the type of man who’d come to an event like this.”
“I don’t?” His eyes glittered and teased. They were such a gorgeous hue that popped against his long, dark lashes. He wasn’t the most handsome man I’d ever seen, but he radiated confidence and sensuality. His features—high cheekbones, a slightly big nose, a strong jaw—wouldn’t have stood out on their own, but the combination was irresistibly masculine. Intriguing. Fuckable.
“No. And I’ve never seen you here before.”
“This isn’t a one-time only thing?”
“It’s a monthly thing, for the Orlando Literacy Council.”
“So you’re an experienced…story…?” He motioned in a half-circle with his hand, and a salacious grin crept on his face.
“Whore?” I offered with mock innocence.
“You said it. I didn’t.”
That made me giggle.

Tamara Lush was born in California and raised in Vermont. She graduated from Emerson College with a degree in broadcast journalism. For the last several years, she’s worked as a reporter and is currently a correspondent in Florida with The Associated Press. She lives with her Italian husband and two dogs on the Gulf Coast. She was recently chosen as one of 24 writers for the Amtrak Residency program, and in 2017, she’ll be riding trains and writing romance. Tamara is a fan of vintage pulp fiction book covers, Sinatra-era jazz, 1980s fashion, tropical chill, kombucha, gin, tonic, beaches, iPhones, Art Deco, telenovelas, coloring books, street art, coconut anything, strong coffee and newspapers.

CONNECT WITH THE AUTHOR