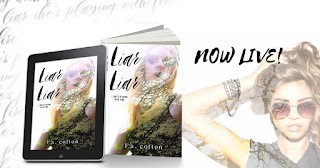 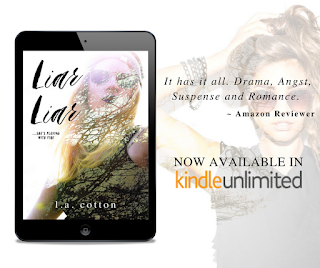 For eighteen-year-old Becca Torrence, the chance to finish high school in a new town, where no one knows her or the secrets of that night, should be a dream come true. But when the first day of school rolls around, something is wrong. Instead of being greeted with warm smiles and reassuring hellos, Becca finds herself on the receiving end of icy stares and cruel whispers. Putting it down to her status as an outsider, she holds her head high, because they can’t know. They can’t. Can they? Determined to make her new life in Credence work, Becca is willing to do whatever it takes to fit in. Even if it means losing herself in the process. A white lie can save you … Too many lies will break you.

Review to be posted soon. 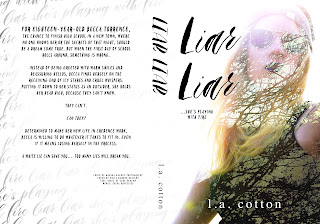 “I’m not going in there.”
I smiled to myself, knowing that any second Becca would relent and enter the funhouse. Everyone did, eventually. It was one of those weird rites of passage, kind of an initiation into Rogues. I would have preferred for her to not be out here full stop, but she was stubborn … or stupid. I hadn’t worked out which. And it wasn’t like she had to listen to me when I’d warned her to stay away, I mean, I was no one to her. Just some guy that blew hot and cold and hid in the shadows while she hung out with her friends.
Fuck.
I was twisted over her, and I had no right to be. A complication she did not need in her already complicated life. But I couldn’t seem to stay away. Becca drew me in like a moth to a flame. Only problem, I was pretty sure one, or both of us, would end up burned.
Leaning back against the decaying paintwork, I pinched the bridge of my nose, smoothing my fingers up across of eyebrows. Tension radiated through me. And while I’d always been on edge—guarded—it had been ten times worse since Becca arrived in Credence. I just didn’t know what the hell to do about it. Getting close to her was a bad idea. The worst. And yet, here I was, stalking her like some creeper.
The bickering died down and after a couple of minutes, the girls entered the house.  Without overthinking it, I slipped around the side of the building and in through the service door. I came back here sometimes to get away. There was an office and a hallway with stair access to the upper floor which is where I headed, knowing that it wouldn’t take them long to enter the mirror maze.
“Don’t panic, okay?” Lilly’s voice carried through the air. “First time I did it, Jay had to come in and rescue me.”
“I fucking hate this part,” Peters grunted and I stifled a laugh. She was a strange one, but she’d really pulled through for me over this thing with Becca and Kendall. “Over here.”
I lingered in the service hallway, waiting for them to pass. Once they disappeared inside, I slipped in behind, silently cursing when I realized that someone had been in and messed with the route. Guys were always coming up here, moving the mirrors and creating new pathways. It was a joke played on each senior year. Peters had disappeared, leaving Lilly and Becca as they fumbled their way around the room. My feet carried me forward, pulled toward her like a magnet, but she paused and glanced back at the door. I stilled, pressing back against the wall. Her eyes were trained right on me, but my black jacket and jeans blended in with the black walls. If I moved a couple steps to the left, chances were, she’d see me, or a reflection of me.
“Lilly,” she hissed, her eyes darting around the room, fear quivering in her voice.
“Here, Becca,” Lilly called, spurring Becca forward. She rooted in her jeans pocket, sliding out her cell phone. It lit up the space in front of her, and I held my breath hoping she didn’t turn back because there was nowhere for me to hide now.  “Lilly, where are you?”
Becca moved further away, and I let her go. After all, what else could I do? Reveal myself and have to explain that I was here all along. Watching her from the shadows. Following her around like some puppy dog. Not happening. The light grew weaker and weaker until she was gone.
And I was alone.


Contemporary romance and romantic suspense … written with feeling L.A is an author of contemporary romance novels ranging from sweet with just a hint of steam, to suspenseful reads full of angst, tension, twists, and turns. Home is a small town in the middle of England where she currently juggles being a full-time mum to two little people with writing. In her spare time (and when she’s not camped out in front of the laptop) you’ll most likely find L. A immersed in a book, escaping the chaos that is life.