New York Times bestselling author Sawyer Bennett has written her most gripping and poignant tale yet. Provocatively heart-breaking, audaciously irreverent and romantically fulfilling, The Hard Truth About Sunshine exposes just how very thin the line is between a full life and an empty existence. Despite having narrowly escaped death's clutches, Christopher Barlow is grateful for nothing. His capacity to love has been crushed. He hates everyone and everything, completely unable to see past the gray stain of misery that coats his perception of the world. It's only after he involuntarily joins a band of depressed misfits who are struggling to overcome their own problems, does Christopher start to re-evaluate his lot in life. What could they possibly learn from one another? How could they possibly help each other to heal? And the question that Christopher asks himself over and over again... can he learn to love again? He's about to find out as he embarks upon a cross country trip with a beautiful woman who is going blind, a boy with terminal cancer, and an abuse victim who can't decide whether she wants to live or die. Four people with nothing in common but their destination. They will encounter adventure, thrills, loss and love. And within their travels they will learn the greatest lesson of all. The hard truth about sunshine... Warning: This book deals with some tough issues including suicide and sexual abuse.

Jillian holds my gaze for a moment, her eyes drilling into mine before she gently tugs on the material of my jeans near the shin rod of my prosthetic. “What happened to you?” She doesn’t look away. Not down at the fire, not down to my legs. She stares right at me. Although my gut is turning slightly at the thought of telling her what she asked, I forge straight ahead. For the first time, I tell someone who is not medical personnel or a shrink my story. “I was driving a military Humvee and the right front tire ran over a roadside bomb,” I say, and Jillian makes a sound of distress low her in throat as her eyes turn sad. “It completely obliterated my buddy sitting in the passenger seat.” To my surprise, Jillian scoots over closer to me and lays her head on my shoulder. She pushes her hand in between my ribs and my arm, curling her fingers over my bicep. It’s a show of support. Solidarity. That she’s settled in for the long haul of this story, and she wants to hear it all. “It didn’t blow my leg off,” I tell her, and I can feel her body jerk slightly in surprise. Her fingers squeeze my bicep. “The fingers yes, the leg no. It just shattered and shredded it badly, but the doctors tried hard to save it.” “Obviously, they couldn’t,” she whispers the obvious. “They tried for three months,” I tell her, reaching down to grab my phone laying near my left hip. Jillian lifts her head up, watching as I pull up my pictures. I scroll backward, but it doesn’t take long to find what I’m looking for because I don’t take a lot of photos. I hold the phone out so she can see. “This was taken about a month after my injury.” Jillian makes a strangled sound as she looks at the photo of me in bed. My eyes are half open because I was bombed out on so many heavy-duty pain medications, and I have a grimace on my face. I vaguely remember this picture being taken, and I think it may have been by my brother, Hank, when he came to visit once during that first month. He came a few more times after that, and then he didn’t. Jillian’s eyes roam over the photo. My leg is encased in the external fixator with several rods leading from the outside of the cage right into my skin, where it’s drilled through and into the bone to hold the pieces together. The wounds on my leg are all open to the air, red and some of them dripping with puss and lined with blisters. I’ve got IVs in both arms and a PICC line in the right side of my neck to deliver the hordes of antibiotics and pain meds I needed to keep me alive and functioning. I took the maximum dosages they allowed me, preferring to try to be oblivious to what was happening. Yet, the pain was so great it just couldn’t be fully erased. Jillian turns her head to look at me, and I lay the phone back down. “How long were you like that?” “Three months. But they couldn’t get ahead of the infections, which were delaying the bones from knitting. I was in so much pain that I wanted them to amputate.” “You had to make that decision?” she whispers. I nod. “Yup. I mean… the doctors were at the point they felt it was the right way to go, although they were willing to keep trying if I wanted. But I wanted it gone. I was tired of being in the hospital and being in so much pain. I just wanted it gone.” “Do you regret that decision?” she asks me bluntly, but with that still-sweet melody her voice makes. The question doesn’t bother me, because even her hard questions sound lovely. “Yes,” I tell her without any shame. “I wonder what would have happened if I held on just a little bit longer. Not long after the leg came off, the pain receded and I became more lucid. Once I’d forgotten how bad the infections smelled, I regretted it.” “Three months is an awful long time to be in pain like that,” she points out the obvious. I shrug. “And the rest of my life is a long time to wonder ‘what if.’” 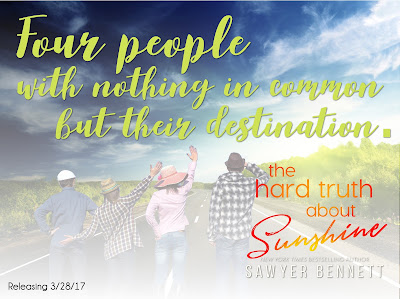 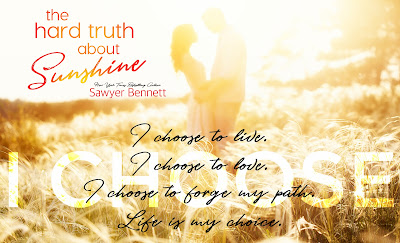 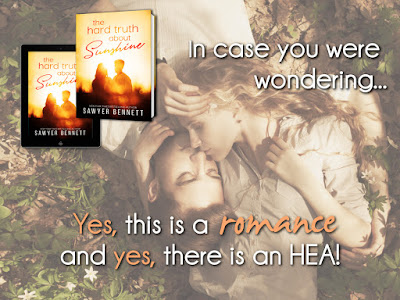 Since the release of her debut contemporary romance novel, Off Sides, in January 2013, Sawyer Bennett has released more than 30 books and has been featured on both the USA Today and New York Times bestseller lists on multiple occasions. A reformed trial lawyer from North Carolina, Sawyer uses real life experience to create relatable, sexy stories that appeal to a wide array of readers. From new adult to erotic contemporary romance, Sawyer writes something for just about everyone. Sawyer likes her Bloody Marys strong, her martinis dirty, and her heroes a combination of the two. When not bringing fictional romance to life, Sawyer is a chauffeur, stylist, chef, maid, and personal assistant to a very active toddler, as well as full-time servant to two adorably naughty dogs. She believes in the good of others, and that a bad day can be cured with a great work-out, cake, or a combination of the two.
WEBSITE | FACEBOOK | TWITTER | BOOKBUB | AMAZON AUTHOR PAGE | INSTAGRAM
Posted by jls0622 at 1:47 PM