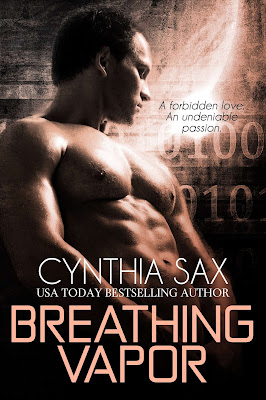 Vapor is the most advanced cyborg the Humanoid Alliance has ever developed. He’s a finely honed weapon, a warrior without parallel, half man and half machine. No lock can contain him. No being can stop him. Whatever he wants, he takes. He wants Mira Breazeal, the Designer’s daughter. She’s his one temptation, his sexy target. Vapor shouldn’t crave her caresses, steal her kisses, make her scream with ecstasy. The cyborgs want her dead and they would question his loyalty if he didn’t kill her. The humans would shoot him on sight if he dared to touch her. Their love is forbidden. Their desire could be lethal. One human and one cyborg will risk everything for a moment of passion. 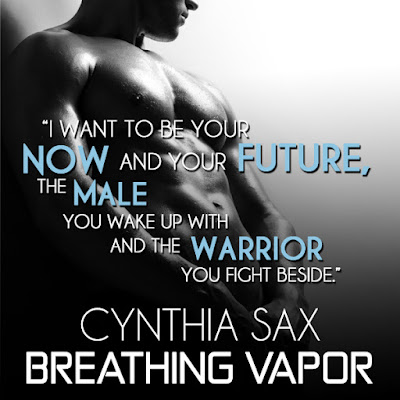 “Why do you smell like that cyborg you sold?” Vapor leaned closer to her.

His nose wrinkled. “You do.”

Vapor surveyed her body with his blades.  He was careful, not making a single incision, his weapons being an extension of his hands.

“You told me a lie. Now, tell me one thing that’s true.” He skimmed the metal over her breasts, encircling her taut nipples. “That is, if you’re capable of truth.”

He expected her to fabricate an answer. She could tell the truth and he wouldn’t believe her. “When I was young.” Before her mom was killed. “I would study my father’s cyborgs, your predecessors, imitating their blank expressions, striving for that level of emotionlessness.” She gave him a truth that would hurt no other being if it were revealed. “They were his creations and I thought if I looked like them, he’d love me.”

Vapor’s gaze dropped to her breasts, lower to her hips, and then returned to her face. “You don’t look like a cyborg.”

She didn’t act like one either. She was her mom’s daughter, caring too much, risking even more. “I wasn’t successful and he never grew to love me.” She was a distraction from her father’s work.

Vapor looked at Mira for one, two heartbeats, pausing in his exploration of her form, his brown hair mussed and his face unreadable.

“I asked for the truth.” He shook his head. “And you tell me a story about your father loving his cyborgs.” He raised his daggers. “I should cut you for that, teach you a lesson.”

Mira wasn’t afraid of him. Vapor was a killer but he wasn’t cruel. “I should scream, let the guards capture your rebellious ass.”

“You won’t.” He leaned forward, his nose close to her right breast and he inhaled. “That’s not accidental spittle. The scent is too intense for that. You allowed the cyborg to suck on your breast, to mark you.” His eyes flashed with fury.

“I didn’t allow anything.”

“You’re mine.” Vapor sliced the cloth. “No other male marks you.”¸ 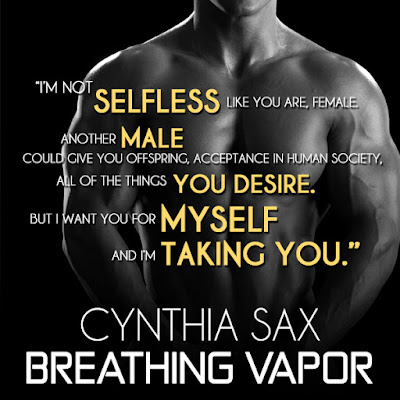 Sign up for her dirty-joke-filled release day newsletter and visit her on the web at www.CynthiaSax.com