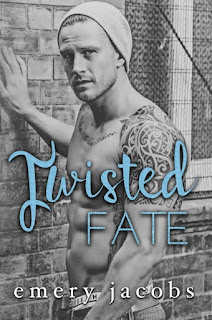 Three lives.
Two love stories.
The past, the present...

When Piper Evans stumbled into Jack Alexander’s life, he knew things were about to change.  Her free spirit and noncommittal attitude left him wanting more. A lot more—he wanted forever. Unfortunately, forever becomes complicated when fate has other plans.

But that was years ago...

Still shattered by guilt, Jack lives his life in agony over the past—never embracing the present. But when Jovie Blake shows up demanding a piece of his heart, the past he thought he'd buried comes crashing down around him, forcing him to confront what he had lost so long ago.

Regret is inevitable, and no one’s heart is safe. Can fate be so twisted and cruel?

Review:
[Mandy]
Amazon/Goodreads Rating: 4/5 Stars
In Patti's Imagination Rating: 9/10 Stars
The story of Jack and Jovie is a touching one where the author bravely examines the socially debilitating condition of Anxiety Attacks.
Right from the get go, it is clear that both these characters come with baggage. Unfortunately, due to life as it is, there are only a set amount of circumstances that can be used as “baggage” in a romance novel, so as a result, the outcome of the story is fairly predictable, and thus the reason for my score of 4 stars, my actual rating would be 9/10, therefore a 4.5, because, the despite that, the story is well told, and in my opinion, well researched.
Jack’s occupation of a tattoo artist is well explored and many of the scenes play off in the tattoo parlour, where we also meet Annie and Fish, his colleagues and friends. Jovie’s job as a waitress also plays a role in the background of the story, unfortunately her college life is only mentioned in passing. HOWEVER! The characters, even the supporting characters, are well developed and play off well against each other. They are complete people whom some I really liked, and one or two I wanted to smack. The characters were real enough to me that, after 2 other books, they are still fresh in my mind, and while I was reading the book, I was thinking of it while doing my chores and wanting to get back to it. There is also a thread of lighthearted fun and humour threading through what could potentially have been an angst filled darker read.
This author has relied on good storytelling and solid research to get her point across. The love scenes are well described and bad language is used mostly in the context of guy talk.
All in all this is an enjoyable read that keeps one turning pages and I wholeheartedly recommend it.
Congratulations to the author on a job well done. 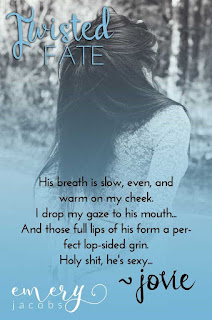 Kindle Paperwhite or One of Five Signed paperbacks of Twisted Fate 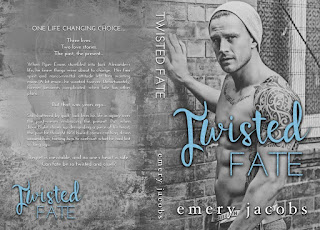 Emery grew up in Southern Arkansas and has lived most of her adult life in Northern Louisiana. She loves real life romance…lots of angst and heartbreak, but always a happy ending. She spends her days working as a Nurse Practitioner in rural health and her nights reading, writing, and occasionally sleeping.