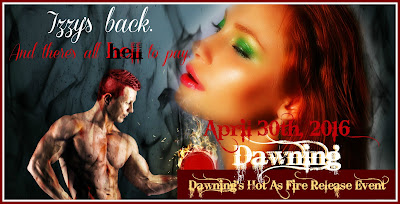 Izzy and Lucas have been through quite the ordeal over the last year: chased down by demons, hunted by Dark angels, and sought after by a sadistic, gorgeous mother-in-law. Now they’re back, and there’s a lot of loose ends to tie up. Like the army of juiced up toddlers, the flamboyant villain, and the sociopathic Mother Dearest. Not to mention, it’s now their sole duty to seek the help of the seven kings in the In-Between realm, which sounds easier than it is.

Dawning follows Izzy as she is once again the woman of the hour, the woman who can bring the realms together, the woman with that special something-something that everyone, including her vindictive, crazy mother-in-law, are working tirelessly to capture. Being special never felt like so much work. Saving the world was never something Izzy planned to do, but she’ll have to if she doesn’t want the mortal world to end, or any others for that matter. 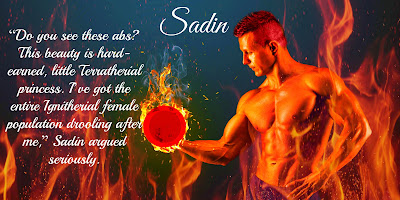 I was pinned beneath a vampire—well, a vampire-angel—and entirely at his mercy.

Beyond the privacy bubble there was a world of demons and supernatural creatures warring against each other. But here, inside this tent with this incredible specimen of pure power, I was just a woman. And here, this vampire-angel, who was covered from head to toe in muscles that were bare and rippling with pent up tension, was just a man.

The pads of my fingertips traced the hard grooves of Lucas’ abdomen, feeling the immense strain as they quivered beneath the touch. Hot air breathed over the column of my neck as my hands quested further down, unhooking his belt with a little effort—or a whole lot of it—and sliding it from his pants. The soft thump echoed inside the quiet room as the heavy buckle of the belt hit the ground; it was the only sound inside here, aside from my heavy breathing.

Lucas’ lips traced my jugular, eliciting a soft gasp of air to escape my mouth. “Why must you entice me so intensely? I desire you so fervently that any moment I might steal you away, satisfy my yearning to have you, and do so without pause.”

I swallowed around my own desire to shut that pretty mouth of his with a sound kiss. Instead, my hand undid the zip and button of his pants as efficiently as was realistic for me, and slipped my hand inside. Lucas’ jaw went taut the moment I palmed him.

Smirking, my eyes trailed from the place my hand disappeared all the way back to his glowing gaze. “Less talking; more doing. I don’t want to get interrupted before I’ve satisfied my hunger for you.”

Dawning’s Hot As Fire Release Event—April 30th, 2016:Hot prizes, even hotter authors, and plenty of fun to keep you reeling from Dawning’s release! 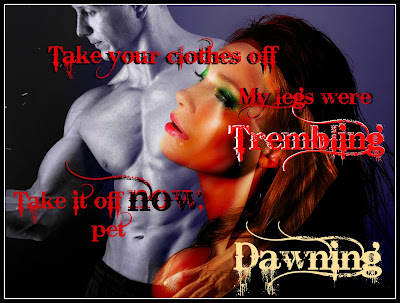 I am a mother of three, living in California, USA. I have always been an avid reader of romance, particularly the paranormal genre. However, in the last few years, I have taken a serious interest in writing my own versions of these worlds. I write mainly romance, mainly featuring paranormal, supernatural, and vampires. All of my stories have an element of humor. I want to create a world that my readers can really immerse themselves into as the main protagonist.