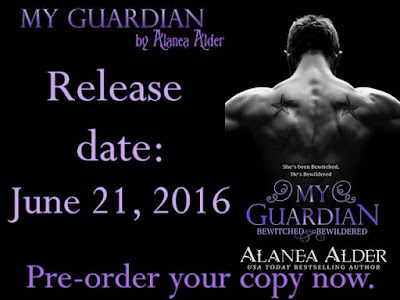 Do you enjoy books that make you laugh out loud?
Does the idea of quirky, intelligent heroines make you fist pump?
Do you understand and appreciate references to geek culture?
Then this is the series for you~!


It all started with My Commander, which now has over 500 ★★★★★ reviews. The story continued in My Protector, with the vampire Gavriel Ambrosios. In the USA Today Best Seller My Healer we got to read about fun-loving wolf-shifter, Colton Albright. Also a USA Today Best Seller, My Savior delved into the magic world of the fae with Darian Vi’Alina. Most recently in another USA Today Best Seller, My Brother’s Keeper, we found out how far a witch will go to protect his family with Kendrick Ashwood. In My Guardian we travel to the vampire’s pillar city of Noctem Falls where Adriel Aristaios will have to come to terms with the prejudices of his people.


The next chapter in the Bewitched and Bewildered series is about to begin.


Meryn and Beth have been summoned by Beth’s uncle and council elder, Magnus Rioux to the vampire’s pillar city of Noctem Falls. Meryn in a city of vampires, what could go wrong? Aiden and Gavriel are about to find out.


Eva Mae Miller has been around for a long time. But never in all of her centuries has she ever had to turn to vampires for sanctuary. But when whole paranormal families begin disappearing in her quiet Texas suburb, Eva knows that it’s time to set her pride aside and join the other refugees heading to Noctem Falls for protection.

Adriel Aristaios doesn’t know what to make of the small human his commander is mated to. Bethy assures him that Meryn is sane, but he’s not so sure. Magnus must be out of his mind bringing a pregnant human and precious Bethy back to the City of the Night, just as things are about to get ugly. To complicate matters he’s pretty sure the sassy, blonde shifter who has just arrived is his mate. How can he possibly do his duty and protect their Prince, when he has not only his commander’s mate and little Bethy to guard, but also the woman who has stolen his heart.

When racial tensions threaten to boil over and sink the city in chaos, Adriel surprisingly finds himself relying on wacky little Meryn and his mate to help keep things from turning violent. But as more information comes to light, it’s clear that someone is out to destroy his city. The question is will they find them in time? 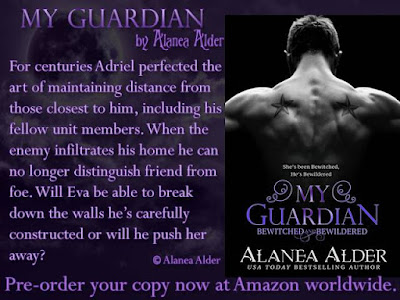 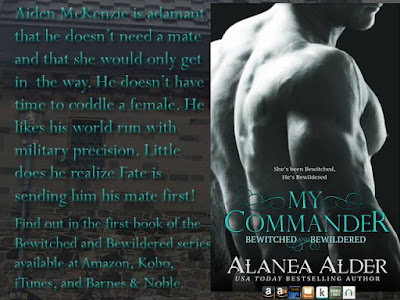 When the topic of grandchildren comes up during a weekly sewing circle the matriarchs of the founding families seek out the witch Elder to scry to see if their sons have mates. They are shocked to discover that many of their son’s mates are out in the world and are human!


Fearing that their future daughter in laws will end up dead before being claimed and providing them with grandchildren to spoil, they convince their own mates that something must be done. After gathering all of the warriors together in a fake award ceremony the witch Elder casts a spell to pull the warrior’s mates to them, whether they want it or not.


Aiden McKenzie is adamant that he doesn’t need a mate and that she would only get in the way. He doesn’t have time to coddle a female. He likes his world run with military precision. Little does he realize, Fate is sending him his mate first! He meets his destined mate Meryn Evans and things go downhill from there. She is the embodiment of chaos. In the first twenty-four hours she kicks, screams and knocks her bear shifting mate unconscious.


Eventually they discover that life before finding each other may have been good, but life afterwards is perfect, even if it involves super soaker battles and accidentally discharging hand grenades.


Unfortunately the joy of their mating is overshadowed when Aiden and Meryn find themselves embroiled in a missing persons case assigned to Aiden by the Lycaonian Council. By assisting Aiden, Meryn finds herself the focus of a demented killer.


Can Aiden and the elite warriors from the Alpha Unit keep Meryn safe? Or did Fate bring her to Lycaonia to die? 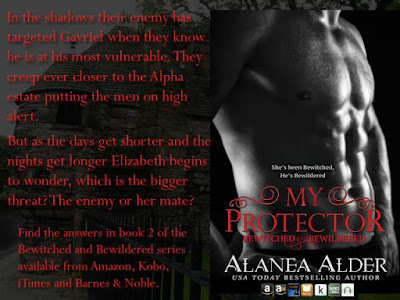 Gavriel Ambrosios has been dreaming of his accident prone mate for weeks. Now that he is nearing the apex of his vampiric transition, she has made her way to Lycaonia, just when he is at his most dangerous.


Elizabeth Monroe was planning on staying in Lycaonia while humans forgot about the swan dive she took out of her boss’s office window. Little did she know that this short side trip was about to become permanent. Gavriel is the mate she has always dreamed of. Even as he sweeps her off her feet his need to protect her has him pushing her away. She’s both concerned with and drawn to his darker nature, but is determined to see him through his transition.


In the shadows their enemy has targeted Gavriel when they know he is at his most vulnerable. They creep ever closer to the Alpha estate putting the men on high alert.


But as the days get shorter and the nights get longer Elizabeth begins to wonder, which is the bigger threat? The enemy or her mate? 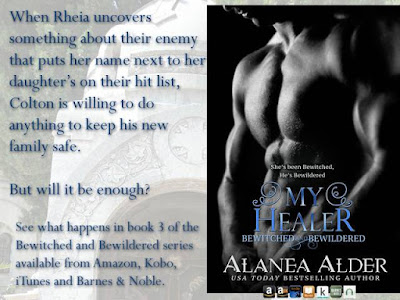 Fun loving wolf-shifter Colton Albright’s usual concern…his next meal, has been replaced by haunted dreams. The nightly visions of the sad, anxious face of his mate have this jovial jokester withdrawing from his fellow Alpha Unit members.

Rheia Bradley is a dedicated professional that lives to help others, but has long forgotten how to help herself. When she arrives in Lycaonia seeking the protection of the warrior units, Colton is ecstatic to discover that she’s his mate. His relief is quickly eclipsed by one small problem, a tiny, solemn four-year-old girl who happens to be his mate’s adopted daughter. Which means… he is now a father!


While Rheia settles into her new job, Colton and all his fellow warriors are about to get a crash course on little girls. The men quickly learn that not one ounce of their centuries-long training has prepared any them for this precocious child.


When Rheia uncovers something about their enemy that puts her name next to her daughter’s on their hit list, Colton is willing to do anything to keep his new family safe. But will it be enough? 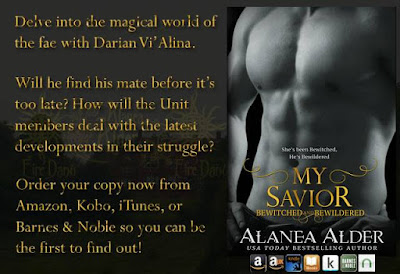 Amelia has dreamt of her mate since she was a little girl. All her life visions of a golden prince have warmed her heart and promised a fairy-tale future. She longs for the day when they will finally be together.

When the fateful day arrives and she meets Darian for the first time, she is nearly destroyed by his unequivocal rejection. His continued denial of their destined relationship has her doubting her own self worth and the visions she has had all her life.


Darian is teetering on the edge. He refuses to acknowledge Amelia as his mate and shadows continue to spread across his heart. He has grown used to the emptiness in his soul and almost fears the barrage of emotions she elicits. When an unexpected tragedy sends Darian spiraling into a hopeless abyss, will Amelia have the strength to pull him out, or will she succumb to her own darkness? 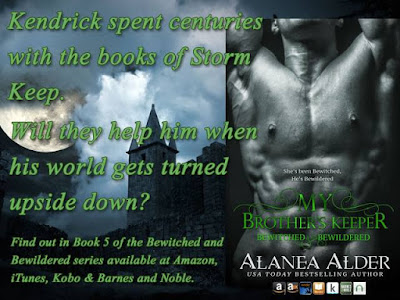 Two hundred years ago Kendrick Ashwood had a premonition that showed him the gruesome image of his baby brother being killed in the line of duty while serving with the Alpha Unit. When centuries go by and Keelan is still alive and well, he begins to relax. He believes that his prayers sent to the Gods to make him wrong this one time have been answered.


As Kendrick feels his godsdaughter’s magic flare out of control he immediately merges with her in an attempt to rein it in. That is when he learns of the tragedy that has taken his only family away from him.


Using every resource at his disposal he immediately heads for Lycaonia to find out for himself who would be suicidal enough to harm his brother. What he finds shocks him to his core.


Anne Bennett gets a phone call that changes her life. Her new best friend Keelan has been hurt and his commander is asking her to move in to help take care of him. Her heart breaks when she hears from his family that the dreams she has been having of them together were shared by Keelan and that he was meant to be her mate. Upon meeting Kendrick, her entire world is shaken. His more mature appearance and perpetual frown makes him look more like the man from her dreams than Keelan ever did.


As the Alpha Unit races to find the enemies who have stolen Keelan’s soul and covered Lycaonia in black magic, Kendrick begins to uncover dreadful truth behind the necklaces. When turning to Anne feels more natural than it should, Kendrick faces the fact that Anne truly is his mate.

As the paranormal world teeters on the brink of chaos, he finds himself protecting not his brother’s mate, but his own.

“Meryn! How many times do I have to tell you no sex talk at the table!” Aiden exclaimed.
Meryn’s face became a mask of innocence. “I didn’t say anything about sex, you did.”
Colton choked on his water and Rheia beat him on the back.
Aiden growled at his friend. “Shut up mutt.”
“Too bad Jaxon and Noah ate earlier I’m sure those youngsters would appreciate the pointers.” Gavriel commented.
Aiden shot him a dirty look. “Et, tu?”
“Aiden they know we have sex, I didn’t get this way by immaculate conception.” Meryn pointed down to her rounded belly.
“No, you got that way on your hands and knees if I remember correctly.” Aiden commented smugly reaching for his water.
“Aiden!” Meryn screeched turning bright red.
This time it was Colton who lightly pounded Rheia on the back as she tried to laugh and swallow her roll at the same time.
“Touché.” Gavriel raised his wine glass to the commander who winked at the vampire.
“I can’t believe you said that!” Meryn said her eyes wide. She stared for a second and then began to giggle. “That was awesome.” She held up a fist to her mate.
Aiden’s huge fist dwarfed Meryn’s little one but he tapped her knuckles gently before leaning in to kiss her nose.
“There is something to be said for doggy style if you know what I mean.” Colton wagged his eyebrows looking self-satisfied until Rheia cuffed him upside the head.
“You mean puppy style?” She asked.
Colton’s mouth dropped open. Next to her Keelan had fallen over to his right and lay across the seat of the chair next to him under the table laughing so hard he wasn’t making any sounds. Darian had his hand covering his mouth but Amelia was willing to bet he was hiding a smile. Everyone at the table was having a hard time breathing for the laughter.
“Puppy? Puppy! I’ll show you puppy later.” Colton murmured under his breath.
Rheia leaned in close to him. “Challenge accepted.”
Colton growled and tore a roll in half with his teeth. 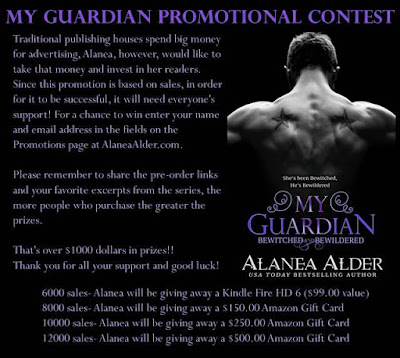