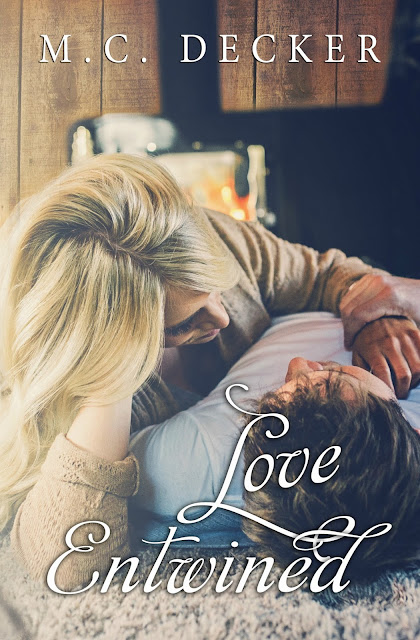 
Are second chances possible in a world plagued with devastating loss, difficult obstacles and everyday commitments?

Having a very genuine understanding of death and grief, Ireland O’Brien has been able to put aside her anger and move forward with a career of helping orphaned children – making their lives better, even though she’s kept her own pain deeply buried within her heart.

Architectural engineer J. Bentley Roberts has also experienced his fair share of heartache. Nearly two decades ago, he suffered the loss of his role model and high school sweetheart in the same tragic accident. And, more recently, Bentley said goodbye to his marriage – leaving him to not only dust himself off, but also to help pick up his teenage son in the unsettling process.

As both of their best friends get ready to say their “I dos,” Ireland and Bentley find themselves together again after twenty years apart.

Will they be able to fight their past demons to finally find the love that’s always entwined them?

Love Entwined is a story of a second chance for Ireland O’Brien and James Bentley Roberts.  Ireland and Bentley meet at a wedding when they are children. Bentley is the ring bearer and Ireland is the flower girl.  At an age where boys had cooties and girls were stupid Ireland decides to befriend Bentley. He was so wrapped up in his Gameboy that their first encounter was less than stellar but they grew to be best friends. As time went by that friendship turned into more. Then tragedy hits Ireland and she loses everything.  Overcoming those loses hasn’t been easy even with the help of her bff, Katie,  who is like a sister to her.  Even twenty years later she still has that pain buried inside while building her career to help orphaned children transition easier than she did.
James also understands heartache, first with losing his uncle, that is his role model and high school sweetheart as a result of a tragic accident and now twenty years later his marriage has fallen apart.  Sure he has his successful architectural career and business with his best friend Greg.  He is struggling with raising his teenage son who isn’t dealing well with the divorce and blames his dad for it.
After being apart for twenty years but never forgetting the other, Ireland and Bentley find themselves once again meeting at a wedding they are both a part of.  This time as maid of honor and best man.  Memories come crashing back for Ireland and all the pain of the loss she has experienced, is she ready to fight those demons and move on?
I found myself not being able to put this book down and staying up way later than I should to finish.  It was great the way the author transitioned from past to present to tell this story of Ireland and Bentley.  I could laugh along with them as kids, teenagers and adults as well as feel the pain and tears.  While the story is told mostly in Ireland’s point of view I really enjoyed when we heard from Bentley.  I wish there would have been more of his point of view.  Katie and Greg were great supporting characters that really enhanced the story.  Not only is this book about a second chance love story, the author writes of loss and divorce along with the unexpected twists that she is known for doing in her books.
I debated on what to rate this book as it a five star read in that I couldn't put it down and I felt as if I was a part of the story but there is a part in the story that I felt wasn't developed enough and I was left with some unanswered questions.
I am happy to say that it was great that the story does not end in a cliffhanger but I do see another book with characters from this book in the future. 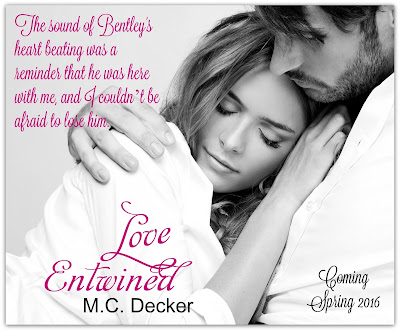 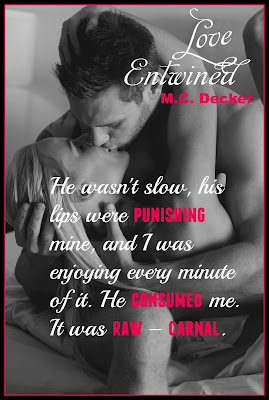 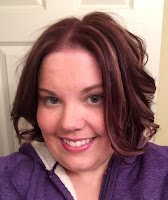 M.C. Decker is the author of the Unspoken Series, which includes Unwritten and Unscripted, and the upcoming standalone novel Love Entwined. She lives in a suburb of Flint, Michigan with her husband, Brian, and spoiled-rotten Siamese cat, Simon. For the last decade, she has worked as a journalist for several community newspapers in Mid-Michigan and Michigan’s Thumb region. She enjoys all things '80s and '90s pop culture: movies, boy bands, music and especially the color, hot pink. She also strictly lives by the motto, "Life is better in flip flops," and is a diehard Detroit Tigers fan. 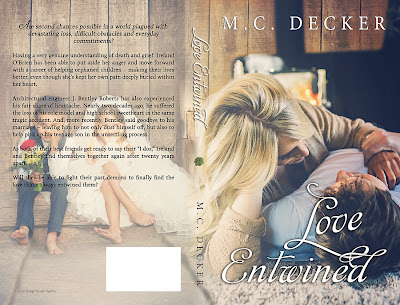