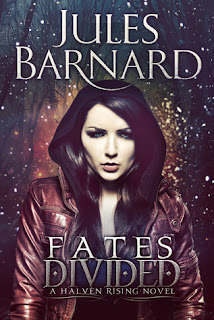 Elena Rosales has busted her ass to get into a good college. She’s the only one in her family ever to attend, and expectations are high. No pressure. But Elena’s got this one in the bag, because she’s as dependable as the molecules she studies, as reliable as the chemical reactions that comfort her in their predictability. Until they don’t.Elena has always wondered why her mother abandoned her on her first birthday. It’s not until she turns eighteen and her chemistry experiments go berserk that she learns the truth: Her mother wasn’t human, and the Fae are willing to harm those Elena loves if she doesn’t use her power over the elements to cure them of a deadly disease.Derek, Elena’s brooding neighbor, isn’t the friendliest guy, but he has access to an off-hours lab and is willing to help Elena create the antivirus. He has his own secrets to keep, and this business Elena is mixed up in could blow his cover. But when Elena and Derek get together, more than chemicals spark fire—and they soon discover just how complicated attraction can get when they find themselves on the other side of the portal, fighting for survival. Lives collide, and allegiance and love are tested, in Fates Divided.-----In the Halven Rising Series, love and ancient allegiances are threatened when the worlds of Fae and Halven collide. Each Halven Rising novel features a different couple and may be read as a standalone, but an overreaching story arc connects the books, so it’s fun to read them in order.

If you could sum up Fates Divided in three words, what would they be?
Unexpected wonderful book
What was one of the most memorable moments of Fates Divided?
One memorable moment was right from the beginning with Elena discovering her powers. There are so many memorable moments in this book.
Which character – as performed by Elizabeth Evans – was your favorite?
Elizabeth Evans did a wonderful job with changing of her voice for each of the different characters it is not easy to decide but I really liked how she portrayed Derek.
Any additional comments?
I am not a fan of paranormal books but I love the Blue Series by this author so when I had the opportunity to both read and listen to this book I took the chance. I am very happy that I did. Right from the start, I was drawn into the story and didn’t want to stop reading or listening. The unknown of what was going to happen with the different twist thrown in really kept this book on track for me. The interaction of the characters in both worlds along with the beliefs and how people treated others brought the book back to reality. I wasn’t expecting several turn of events and at times thought I knew what was going to happen to be pleasantly surprised that I was not correct. I will most definitely be reading the next book in this series and listening to it if Elizabeth Evans does the narration. I found listening to the story was more enjoyable than when I read the book a year ago. The narration of this already great story just put it over the top. I was able to visualize more of the story and the way the narrator was able to change her voice for the different characters made it easy to listen along. You could also feel the emotions of the characters with the way the narrator read the story. You did not tire of listening to her at all. I do hope that Elena and Derek will have more in future books as they have more to their story as well.

A RITA-nominated author, Jules Barnard began her publishing career in 2014 with Deep Blue, the first book in the contemporary Blue Series, hitting bestseller lists on Amazon, iBooks, and All Romance. In 2015, she launched Fates Divided, the first of a romantic fantasy series Library Journal calls “…an exciting new fantasy adventure.” Whether she’s writing about beautiful Lake Tahoe, or a Fae world embedded in a college campus, Jules spins suspenseful stories filled with realistic characters who have heart and humor.When Jules isn’t in her sweatpants writing and rewarding herself with chocolate, she spends her time with her husband and two children in their small hometown on the California coast. She credits herself with the ability to read while running on the treadmill or burning dinner.