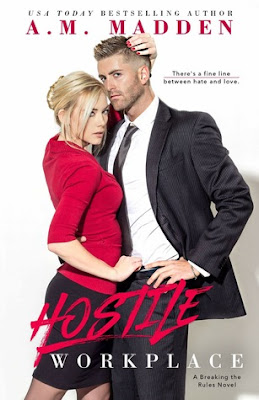 Sam Stanton knows these simple facts:~ He is a great catch—successful, smart, gorgeous…but the wrong woman caught him.~ He has the perfect girl who is madly in love with him.~ He wasted six years of his life by playing it safe.~ He is damn good at his job and intends to keep climbing the ladder. ~ He can’t get her off his mind or out of his heart—no matter how hard he tries.But, what he doesn’t know is just as important:~ Will he ever really move on and forget how badly she broke his heart?~ Should he settle for a sure thing, even knowing it’s the wrong thing?~ Can he give up his career for a chance at happiness? ~ Does he correct one mistake with another?~ What would he do if she were to return?Confused yet? Welcome to Sam Stanton’s life.Hostile Workplace is an emotional contemporary romantic with comedic moments peppered in. It is meant for readers who are 18+ due to mature content.

Sam Stanton is a great catch.  He is a successful, smart and gorgeous workaholic. The problem is that the wrong woman has caught him. His family tells him that he is making a mistake with this girl who is madly in love with him. She was there for him when his heart was broken and he wants to play it safe.  Sam is good at his job and climbing the ladder is his focus.  Sure his coworkers don’t want to be around him as his friend points out, but getting this promotion like he expects is what drives him.   What he doesn’t expect is for the girl who broke his heart to be who he is in competition with for this promotion.  Let the competition begin!
If you think this story is going to be predictable, you are wrong as there are several surprises and so many emotions that go along with this story.  Of course there are many moments of laughter  just when it is needed and to lighten the mood.  Sam isn’t always your favorite person with his behavior and actions, yet at others times you will be cheering for him.  Things in the story are not as they seem and you will not be able to put the book down as secrets are revealed.
If you read book one in the Breaking the Rules series, we met Sam.  In Love On the Horizon, Sam is the brother of Rebecca.  Now we get to know more about Sam and what is going on with him.  I enjoyed reconnecting with the other characters from book one, as well. While this is part of a series, this book can be read as a stand alone.  This author does a great job with her storytelling, so you will never miss a beat. But book one will really seal the mindset of the characters and bring even more depth to the story.  I wasn’t ready for the story to end and I hope the series will continue with books about both Cooper and Liam.

USA Today BESTSELLING ROMANCE AUTHORA.M. Madden's romance debut is The Back-Up Series, consisting of Back-Up, Front & Center, and Encore.A.M. Madden is a wife, a mother, an avid reader of romance novels and now an author. In Back-up she aspired to create a fun, sexy, realistic romantic story. She wanted to create characters that the reader could relate to and feel as if they knew personally. A self-proclaimed hopeless romantic, she loves getting lost in a good book. She uses every free moment of her time writing, while raising teenage boys.